So, let’s just put it out there: my name isn’t really Mommy. You’re shocked, right? 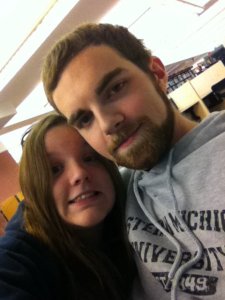 My name is Katie. I live in Michigan with my husband, Mike. We’ve been together since September 2008 (married as of September 2014!) and we welcomed our first baby girl in January 2013. Our life together is stressful, but it is wonderful. When things are good, they’re pretty great. We fight like any other couple, we sometimes get on each other’s nerves – he says I’m neurotic and I think he spends too much time with his technology, but we love each other and we’re devoted to making it all work. He’s a computer guy. He built his own desktop, he plays with Linux in his spare time, and he’d play video games probably every waking second of the day if I’d let him. He’s 27 years old and he’s the second best thing that’s ever happened to me. (Guess what the first is?)

And then there’s me. I received my bachelor’s degree in criminology and criminal justice in April of 2012. I grew up in a fairly small town in mid-Michigan. Growing up, I wanted to be a lot of things: a veterinarian, an actress, a police officer, a novelist, an English teacher, a journalist. I wanted to travel the world, I wanted to make a difference in people’s lives, I wanted to educate, I wanted to do something great – and somehow I landed in the criminology program at my university. I’m still not sure how it happened. I realized a little too late (months before graduation) that what I really wanted to do was special education, but at that point, I just wanted to finish out my degree and be done with school. I’d figure it all out later.

The problem was, I found out I was pregnant within a few weeks of finishing college. I had a job I loved, but didn’t pay very much at all, and I hadn’t figured anything out yet. Having a baby was not in the plan. I figured I’d find a good job, settle into it, take a couple years to do something I loved before making the decision to become a parent. I thought I had time. Boy, was I wrong. She was a huge surprise and definitely threw a kink in the works for me. I wasn’t married yet, I didn’t have the “right” job, I was fresh out of school, and I could barely take care of myself let alone another human being – especially one as helpless as a baby. I will admit that at the time I found out I was pregnant, it was the worst news I could have ever received; now, I look back and realize that she’s the best thing that’s ever happened to me.

I changed jobs during the beginning of my pregnancy. I continued to search for something full-time with benefits that would pay the bills, but no one wanted me. Within weeks of giving birth, I realized I didn’t want to go back to work at all and the idea of leaving my baby with someone else caused me great anxiety. I was fortunate enough to find a job that allowed me to work from home and be a full-time stay-at-home mom and began doing that in April 2013. Toward the end of my pregnancy, I began this blog to begin documenting my adventures in mommyhood. If nothing else, it can serve as a page for our families to check in on how everyone’s doing on our end.

A lot happened after that. We eventually got married in September 2014, and in July 2015, we decided that it was time to have another baby. I got my positive pregnancy test exactly eleven days later. During that pregnancy, I lost my job and started my own business, and then my husband lost his job and started doing something that evolved into an even better position. At the end of March 2016, we welcomed our second daughter into the world.

A few months later, just before taking our yearly summer trip, I discovered I was pregnant again, something we hadn’t planned for. A week later, a new pregnancy test showed that I had a very early miscarriage; two months later, I was pregnant for what would be my final time. My son arrived in July 2017. I intended to return to work that September, but in the end, ultimately decided that focusing on my kids was better for everyone.

This may not have been the life I saw myself leading one day, but it’s what I have now and I’m thankful for every moment. The laughter, the tears, all of it – and I’m hoping to share as much as I can with the rest of the world. Or… you know, those of you who read and care at all about this blog.

One day, I’ll probably look back on this thing and think, “What the heck was I even doing?”

Have you ever thought about what it would be like to have kids? Look at the picture above. This is pretty much me all the time. Exhausted. Bags under my eyes. Barely functioning.

At 29 years old, I'm a college graduate, a former business owner, and a full-time stay-at-home mom with three kids and no real social life to speak of. I have no idea what I'm doing but I pretend I do.